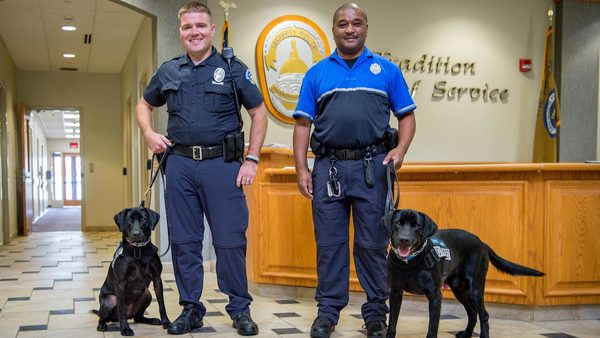 The University of Notre Dame has recently hired two new employees who are known to be best in class for their work.

Toxi and Skeet, a pair of black Labrador retrievers, are the first K-9 members on the Notre Dame Security Police (NDSP) staff. Specially trained to detect explosives and work in an active, high-traffic area, 18-month-old Toxi and 3-year-old Skeet are also the first canines of this kind in Indiana. ​​Acquiring Toxi was made possible by a gift from Jay Town, a 1995 Notre Dame graduate, and his wife, Dana, an Auburn alumna.

The dogs were acquired from a program affiliated with Auburn University and trained in vapor wake detection. According to AMK9, a company that specializes in law enforcement canine training and development, the dogs have been bred, raised and socialized to “work in high-flow pedestrian areas where they can accurately screen hundreds of people passing through an entry point in a nonintrusive way, and follow an explosive target to its source in real time, while the target is in motion.”

This training and technique differs from traditional explosive-sniffing canine detection, which operates in a static environment. Toxi and Skeet are trained to detect multiple types of explosives odors. Similarly trained dogs are also being utilized at several other universities, by professional sports teams and transportation companies, in entertainment avenues and on metropolitan police departments around the country.

“We have been drawing K-9 resources from the surrounding area more frequently for large, high-profile events. Expecting an increased number of highly attended events in our new facilities, this is an important enhancement to our safety and security efforts at Notre Dame,” she said. “We will continue to work with local agencies and offer our new resources to aid local units.”

NDSP security officer Anthony Clark is Skeet’s handler, and police officer Jarett Gilpin is Toxi’s handler. One dog is on duty daily and, when not working, they reside with their handlers in their personal residences.

Clark and Gilpin were chosen by NDSP to serve as handlers through a competitive application process. Upon selection, they traveled to Alabama for seven weeks of training and to pick up their canine partners.

“Toxi and Skeet are nonintrusive, gentle loving dogs,” NDSP Deputy Chief Stephan Smith said. “We are excited to introduce them to campus and the local community so that people are not concerned that there is an imminent threat. We view them as another component to our typical safety and security practices.”

NDSP anticipates including Toxi and Skeet in a number of campus and community events where the public can meet them. Anyone who encounters the dogs while they are on duty is asked to refrain from distracting them while they are “working.” When on duty, Toxi and Skeet will be wearing a working canine officer vest.

Originally published by Sue Lister at news.nd.edu on September 21, 2017.