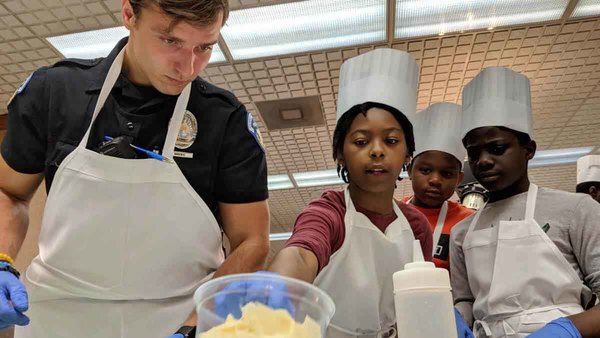 One part law enforcement. One part youth. Add culinary professionals and garnish with fresh ingredients and food for thought.

That’s the recipe for Cooking with Cops, a pilot program at the University of Notre Dame that brings local youth and law enforcement together to improve police-community relations, encourage healthy eating and introduce kids to careers in law enforcement and the culinary arts.

Hosted by the Morris Inn in partnership with Notre Dame Security Police (NDSP), the Robinson Community Learning Center (RCLC) and the Office of Public Affairs, the program kicked off June 9 (Saturday) with a cooking class at McKenna Hall.

The Italian theme was a nod to Rome, one of Notre Dame’s five Global Gateways along with Beijing, Dublin, Jerusalem and London.

In addition to actual cooking, the students learned about safety and sanitation in the kitchen to avoid illness and injury, kitchen vocabulary and the definition of a “course.”

Afterward, they left with a book, “The New Food Lover’s Companion,” bags of ingredients and instructions on how to prepare the same meal at home.

“We’re going to have a lot of fun today,” Calvin Metts, sous chef at the Morris Inn at Notre Dame, said by way of introduction. “I put together a menu for you guys that is simple, so it will give us time to talk.”

“Whistling is not legal, not in a kitchen,” quipped Patrick Dahms, executive director of food, beverage and events at the Morris Inn and the Notre Dame Conference Center. “You can’t whistle.”

The vision of chef Latrice McArthur, executive director of Bella Cuisine Kids Cooking Club, Cooking with Cops started in Chicago as a way to foster positive interactions between young people and police and counter negative perceptions of law enforcement in the community.

Metts grew up in the Windy City, in a middle-class household on the west side, a largely poor and working-class area that struggles with gangs and drugs.

“For them, school was supposed to be my job,” he said of his mother, who attended college in Chicago, and father, who holds two master’s degrees.

On the advice of a jailed cousin, and with encouragement from his parents, he focused on school, earning a bachelor’s degree from St. Joseph’s College in Rensselaer, Indiana, and a culinary degree from Kendall College in Chicago.

He started working at Notre Dame, alongside Dahms and Joe Kurth, senior director of the Morris Inn and Notre Dame Conference Center, in October 2015, following stints as a cook with Intercontinental Hotel Group and a sous chef with Michael Jordan’s steakhouse.

It was around that time that Michael Jordan’s Steakhouse Executive Chef Craig Cooper, aware of his deep ties to Chicago and his desire to give back, invited Metts to participate in the Cooking with Cops program there.

Notre Dame Football season was in full swing, so he had to say no, but the invitation got him to thinking: What if he replicated the program here, with local kids?

“I pitched it to Joe and he said, ‘Run with it,’” Metts said of Kurth.

So he did, straight to Notre Dame Security Police and the Robinson Community Learning Center, an off-campus educational initiative of the University that offers tutoring and other programming to kids of all ages.

They were on board, too.

“In regards to outreach and engagement, it was perfect for us,” Capt. Rob Martinez, head of crime prevention, outreach and safety for NDSP, said of the program.

Velshonna Luckey, youth development program director at the RCLC, described the program as a unique opportunity for RCLC youth to interact with police and culinary professionals in the welcoming environment of campus.

“I can’t think of any other opportunity in South Bend for this to happen,” Luckey said.

While the program checks a number of boxes in terms of health and education, the primary objective is simple: Fostering positive relationships between police and youth around food.

Unfortunately, such work is necessary in some parts of the city, where, for reasons both good and bad, interactions with police often center on enforcement, rather than positive engagement.

That was Metts’ experience in Chicago.

Growing up as a minority in a part of the city marked by poverty and crime, he developed a distrust of law enforcement early on, he said, based on his own experiences with police as well as those of friends and family.

“When I was growing up, my interactions with the police were limited and not very positive,” he said, recalling the time he was searched and questioned at a park near his school after a woman reported him as a suspected drug dealer. The school was mostly white.

Police, conversely, struggle to counter the negative buzz around such encounters, Martinez said, whether isolated or not.

“It takes 100 good acts by police to garner any recognition, but only one bad act to give us all a bad name,” he said.

Back at McKenna Hall, the kids, wearing paper chef hats and white aprons, gathered ingredients for the panzanella and vegetable flatbread from a table at the back of the room — focaccia bread, pancetta, English cucumbers, torn basil, Meyer lemon, mascarpone spread and roasted garlic.

“It’s cool to see police officers in this type of environment, because we usually see them enforcing the law,” said Kasey Bridges, 16, a rising senior at Clay High School in South Bend.

At the same time, “I like cooking,” Bridges said. “I like to find new things to cook, to kind of experiment with what’s in the house.”

Curtis Lee, 10, a rising fifth-grader at Kennedy Primary Center in South Bend, said, “I like how you can cook stuff and give it to other people.”

The kids will return for a second class next month, marking the end of the pilot and the start of a review process to determine how best to proceed with the program, which McArthur, of Bella Cuisine, hopes to replicate nationwide.

Here, Metts would like to scale the program with local schools to reach as many students as possible.

“I feel like I’ve been lucky enough that I’ve had people who looked out for me,” he said, referring to friends, family and teachers. “Now, it’s time for me to look out for someone else."

Originally published by Erin Blasko at news.nd.edu on June 22, 2018.